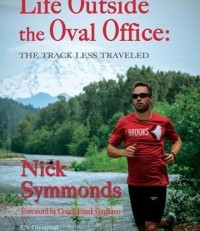 Fame, fast times, and fortune? Sex, drugs, and Hollywood? Yes, you’ll find it all and more in Nick Symmonds’ autobiography Life Outside The Oval Office: The Track Less Traveled.

If you’re one of the many like me who have met Nick by attending one of his signings, then you’ll find a sincere handwritten note when you open the book, followed by the introduction written by the legendary Coach Frank Gagliano, or “Gags” (as he’s known to many in the running community). Gags’ fondness for Nick is evident, especially when speaking of Nick as a young competitor.

Nick shows respect and humility in speaking of his parents and family- a result of his small-town, Midwestern upbringing, I suppose. Religion also plays an interesting part in young Nick’s life; you can be sure to stumble upon that aspect of his growth within the first few pages.

But, as it does time and time again for a young boy growing up, his thoughts turned to the opposite sex, and as has been said, Nick found running not because he enjoyed it (face it, how many of us at first sight loved the fact that we run and run and run around a track and still end up where we’ve started?) but he ran simply due to the fact that a pretty girl (or two) asked him to. Track Nation, of course, owes a huge amount of gratitude to those young girls in Boise, as I’m sure they were highly unaware of the gears they unintentionally put in motion.

This leads us into the crazy world of track & field at the collegiate and professional levels, and of course, the cast of characters Nick meets along the way. Those of us that follow the sport closely will happily recognize names we know and love along the way- those of us who know next to nothing about Nick’s earlier years will surely learn about his competitors that have stoked his fiery spirit along the way. The bachelor pad antics, his ability to out-Jersey the Jersey Shore (he had a hot tub before they did), his ways with the ladies and propensity to drink beer, all coinciding with the enticing aspect of drugs, nightlife, and his methods of navigating it all- indeed, you will find all of this and more in his book.

Some of the best stories Nick tells are of all of the traveling he has done. For those of us that haven’t left the comfort of our own backyards nearly as often, if at all, it’s an eye-opening portal to the testament of the human body as a machine, placed through the constant stresses of jet lag and lack of sleep, and how we as an audience simply expect a stellar athletic performance, despite the rigors of training and travel. Sometimes we, the fans, don’t realize the extent external factors have on our national team members, yet we still want more out of them.

Drug testing, marital infidelity, and sponsorships are just a few parts of #NSOvalOffice (that IS the official hashtag) that Nick enlightens the general, non-competing public about in detail, and in doing so, reinforces the fact that no matter where he’s gone and what mistakes he’s made, his moral compass is still intact after it all.

What I find to be the most inspiring aspect in all 230 pages of reading is that Nick teaches us that it’s okay to cry. To express your emotion not only on the oval through your racing but in any other environment; that it’s okay to have personal response to any situation. In doing so he takes on the stereotype of the typical All-American male and allows for a humanization of his persona. He invites us to realize that he, too, has insecurities just like the rest of us, and he states them without hesitation. We want to believe that all of our athletes are unbreakable, but Nick chooses to bring us in and allows us to experience heartbreak and disappointment alongside him.

Nick lets us in on some of the most important decision-making processes of his life. From coaches and universities to entertainment at meets, he doesn’t hold back on any aspect of how he thinks Track Nation could be even more amazing. He addresses that he hopes he can serve the sport in any form, aspiring to make an impact in even a fraction of the magnitude that legendary Steve “Pre” Prefontaine had done in his short time with us. In many ways, from standing up for LGBT rights, to bringing attention to the lack of administrative transparency within sport, he can easily be seen leading a dialogue for the nation and beyond, perhaps in the same capacity that Pre once did.

My favorite parts of #NSOvalOffice were where I could live vicariously through Nick’s viewpoint on races that I so closely watched him compete in throughout the years. It’s a wonderful opportunity to get inside his head at those points. I thoroughly enjoyed the storytelling Nick wove until the last chapter of his book, where he seemed to rush off a very quick message to his female fans out of necessity. Ladies, I’ll let you read it and respond to him at your own leisure. But the final page is ever-so-fitting, typeface and spacing seeming to work out perfectly as a single meaningful quote lays in front of you. As for the rumors that he dated Paris Hilton, well, wouldn’t you want to read the emails and text messages between the two of them for yourself?

If you’re expecting the adult prose that Nick uses to address his overwhelming issues with politics and the sport while writing for Runner’s World, you won’t find it here. Rather, this book is a coming-of-age novel for Nick’s 17 year-old self. It balances boyish charm while tackling adult issues facing an upcoming professional runner. As a young teenager who isn’t sure of what path to follow, you can surely relate to the same anxieties Nick articulates about those years. For the track and field fan who wants to know what it feels like to toe the line versus the world’s best and take each breath with Nick as he races, it’s in there. If you ever wanted to have a reassuring voice in your head to follow your heart and stand up for what you believe in, Nick’s words will do that. At the end of the day, it’s a breath of fresh air that one of our own has down-to-earth morals and integrity. Indeed, most of the world could use more of Nick’s passion. Perhaps we should all want to exist to live, not live simply to exist. 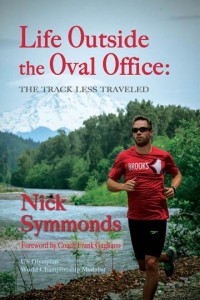 Aysha is a sometimes writer, full-time cheerleader for #TrackNation who has an affinity for style on high-fashion runways and manages to coach Kara Goucher on the art of the selfie in her spare time. Her educational background involves a serious love of science with a dual-degree in Cell Biology & Neuroscience/Psychology, with accompanying research in Stem Cell Biology.

She is currently coached by Rob DeCarlo. Her most epic run was her first marathon, NYC 2013.