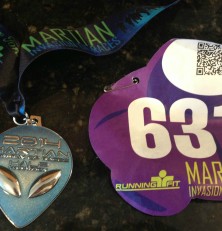 This was my first year to finally do a Martian race, but I’ve heard about them (and have seen their cool shirts and medals) for awhile but never had the chance. I chose to do the half marathon and had a lot of fun!

The course was a general out and back on paved roads which were all in pretty good shape. The course was overall pretty flat with just a few minimal rollers. It was a good course to run a fast time, I think. Along the course there were adequate water and Gatorade stops, but not a ton of other people/spectators (there were some) out on the course. For a half this isn’t so bad, but I wouldn’t have minded some more people or music at a few spots along the way.

Overall the atmosphere was great, which was aided by quite a lot of people participating, and certainly a lot of people stuck around with friends and family afterward because the start/finish area was packed. With over 1500 people in the 5k, just under 1500 in the 10k, 1500 in the half marathon as well, and 360 in the full, that’s a pretty good-sized event, which I find more fun in general. It was a beautiful day and spirits were high.

Post-race the positive atmosphere continued, as a live band played music and lots of people enjoyed the sunshine and cheered on fellow runners. It was a good day just to hang out a bit. There were plenty of refreshments–bagels, muffins, cookies, fruit, water, etc, but you had to get them immediately or lose out. There was a small “finisher area” tent with the refreshments directly after the finish, and the volunteers seemed pretty stingy about letting runners back in after they had already exited.

They went 5-deep in the age groups for awards and were offering what seemed like Martian-themed martini glasses as the award. I barely missed out, but I still got a cool shirt and fun medal out of the deal.

The biggest hassle was the parking, especially as I was unfamiliar with the area. Since the 5k and 10k both started an hour before my half (and the marathon too), there were already a ton of people on-site and all the designated parking lots/areas advertised were full and the place was a zoo. Luckily I found a volunteer that directed me to a local parking garage that was an easy half mile jog from the start. Once I got that figured out, I was golden.

Overall the Martian Invasion of Races is a fun event and I would encourage others to check it out, no matter the desired distance. I’m sure I will be back to do it again. 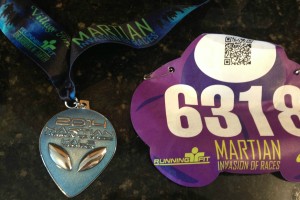